The last thing you expect to see in the opening of a Spike Lee joint is Gone with the Wind. Even if you’ve never seen Gone with the Wind there’s a chance you may recognise the battle of Atlanta train yard scene from any ‘salute to the movies’ montage – proof of how evocative it is in our association with cinema. A field of wounded soldiers is revealed before resting on a shredded confederate flag. The iconic scene opens BlacKkKlansman, a dramatization of the true story of Ron Stallworth (John David Washington), a detective who infiltrated a chapter of the Ku Klux Klan (KKK) in the 1970s.

BlacKkKlansman begins from the platform of a myth that romanticises America’s confederate history, which is followed by an overwhelming ‘scientific explanation’ of white superiority by Dr. Kennebrew Beaureguard (Alec Baldwin at his deranged, authoritarian best). The confederacy lost the American Civil War but they won the battle to control the narrative. In order to maintain the narrative, rooted in white supremacy, collusion was required to maintain a belief in the myth of superiority. In BlacKkKlansman, Lee is both a biographer and interrogator, infiltrating confederate belief systems that perpetuate American myths and how they endure in our culture.

The biopic side of BlacKkKlansman is where the film trudges through repetitive formalities over the recruitment process of the KKK. How Stallworth went undercover, with the help of a white police officer (Adam Driver), lacks tension. Lee establishes the Klan members so well that with each meeting it feels like excessive moustache twirling, until they put on suits, that is. Enter David Duke (Topher Grace), the grand wizard of the KKK in Louisiana. Duke’s civility runs in opposition to the redneck portrayal of Klan members present in most of the film. Grace plays Duke with charm but he’s still ignorant and gullible. Despite the easy target Duke presents, Lee’s depiction is vital in highlighting the different uniforms bigots wear; we know the white hoods, we know arm bands, but we’re still adjusting to them in tailored suits. 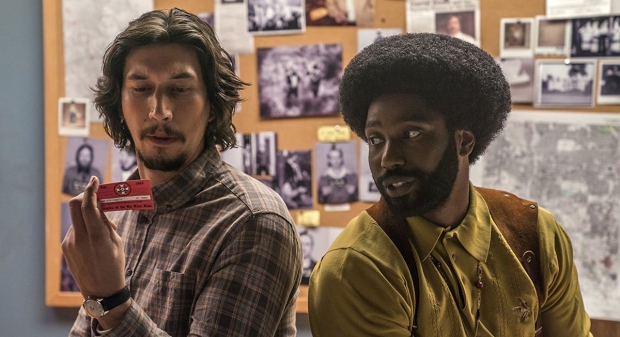 Stallworth is earnest in his quest to make change from within the police force as a black man; you believe his cause despite the arguments that as a cop he becomes part of the problem. Washington is often a picture of composure in the face of racist slurs from other officers, key to surviving a system stacked against him. Washington also does these great karate chops to relieve the tension of each workplace encounter to show he’s not immune to the build-up of anger because he knows how his co-workers demonise black rage to justify their actions; to stay employed, Stallworth needs to be saint. Lee often frames Stallworth in ways that make the curved top of his afro look like a halo.

When BlacKkKlansman turns to interrogating white power structures it becomes ferocious, especially when examining the grievances still raw from the Civil War that fester in American society. In Ta-Nehisi Coates’ essay, Why do so few blacks study the Civil War? he examines how blacks were locked out of the narrative: “The belief that the Civil War wasn’t for us was the result of the country’s long search for a narrative that could reconcile white people with each other, one that avoided what professional historians now know to be true: that one group of Americans attempted to raise a country wholly premised on the property of Negroes, and that another group of Americans, including many Negroes, stopped them.” Coates describes the preferred way the Civil War is remembered as, “…a more comforting story of tragedy, failed compromise, and individual gallantry.”

Building out the frame of American history using cinema with Gone with the Wind, Lee features a scene in BlacKkKlansman where Stallworth spies KKK members watching Birth of a Nation through a tiny window. The inner sanctum of the organisation dedicates itself to celebrating the heroic portrayal of the Klan in Birth of a Nation for motivational purposes. Stallworth witnesses the safe space bigots occupy to refill their hatred and sense of white American entitlement. Lee then contrasts this scene with an activist (played by Harry Belafonte) telling black students the story of the lynching of Jesse Washington in 1916 in Waco, Texas, which is based on an article written by W.E.B. Du Bois that became vital to anti-lynching activists. The two storytelling formats, oral and film, sit side-by-side in a captivating sequence. Here a battle is waged between how different stories are maintained a passed on; film grants immortality while oral history fades when the keepers of those stories die.

While the technical proficiency of storytelling formats have differed for the 150 years since the American Civil War ended, Lee takes a moment to point out that everything is recorded now at the close of BlacKkKlansman. The playing field is level on a camera-to-camera basis. Lee uses real footage from the Unite the Right Rally in Charlottesville, Virginia, that shows white supremacists marching proudly in the streets and the horrific footage of a car hitting a group of counter protesters. President Donald Trump is shown commenting on the incident and placing the blame on both sides. With everything on record it’s harder to hide in 2018, yet America’s ugly past is louder than ever and with an odd sense of misguided pride.

← The Lifestyles of the Rich and Ruthless in All the Money in the World
Us and Dumbo: American dreams and nightmares →