The Dream of the Nineties is Alive in Independence Day: Resurgence 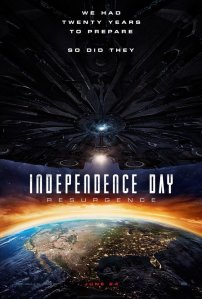 “They like to get the landmarks”, David Levinson (Jeff Goldblum) says as Dubai’s Burj Khalifa Tower falls from the sky to crush the London Bridge in Independence Day: Resurgence. Set and released twenty-years after Independence Day, co-writer and director, Roland Emmerich (Stonewall) returns to state he’s in on the joke. A two decade gap has allowed Independence Day: Resurgence time to develop a self-awareness akin to the other alien invasion film turning twenty this year: Mars Attacks (the sequel we need). It’s unashamedly goofy, sincere with its absurdity and loaded with martian invasion B-movie elements on a champagne budget.

Since the events of Independence Day, the people of Earth have co-opted the alien technology left behind to improve society and achieve world peace! Yes, they crack open a can of diet Gene Roddenberry to show a world in harmony with the jingoistic American bent of the first film absent; it’s as if a whole new world order was built from the lyrics of We are the World. United, mankind has become pragmatic in approaching its place in the universe and built a defence system throughout the solar system believing they’ll be prepared if the aliens return. Spoiler alert: they are not prepared, especially when the creatures reappear with a galactic jackhammer and a grudge.

The dream of 90s blockbusters is alive in Independence Day: Resurgence and it has an upbeat economy that demands all dialogue and plot (coming from five screenwriters: Nicolas Wright, James A. Woods, Dean Devlin, James Vanderbilt and Emmerich) be in service of the most basic motivations so it can take delight in destruction and pew pew pew. Every character talks in statements or one-liners, once only reserved for Arnold Schwarzenegger before firing heat-seeking missiles into bad guys. It’s knowingly cheesy because there’s never going to be gravitas with what they’re saying—it’s more about how they’re reacting. In a scene where Julius Levinson (Judd Hirsch) must outrun an alien induced tsunami in a tiny boat, he doesn’t proclaim the mysteries of life in the face of death, instead, he yells, “holy Moses!” Everything in Independence Day: Resurgence aids basic reasoning; lasers work because of science; someone is good at everything because they’re a pilot; and a Hemsworth is able to share screen time with Charlotte Gainsbourg because it’s a God damn Roland Emmerich movie.

Emmerich’s handle on scale is still remarkable and he knows how to juxtapose man-made objects with otherworldly elements to create a sense of awe without the disconnection that often occurs when scenery is bathed in digital effects. Much like Independence Day, Emmerich overlays disaster movie basics with alien invasion essentials to create the ideal Venn diagram of controlled chaos: the Emm diagram. The crossover is where the director thrives and it’s unlike his contemporaries in bedlam like Michael Bay or Zack Snyder, whose spectacle of destruction is a shallow decadence. Emmerich is more in tune with the euro sci-fi sensibilities of Luc Besson (The Fifth Element) but he does it under the umbrella of the American studio system with a film like Independence Day: Resurgence. And at the core of the Emm diagram is a hefty amount of camp bereft of cynicism, which stands in opposition to the drudgery of modern blockbusters and their attempts at soulless grit.

One noticeable difference is how much the execution of blockbuster filmmaking has changed in two decades and Independence Day: Resurgence contains many of these contrivances. Independence Day is self-contained in a time before ‘cinematic universes’, which upon reflection is now part of the charm of films from the 90s. Independence Day: Resurgence works as a sequel but it’s full of setup hinting at more, and stopping down to do so, that sticks out like the Will Smith shaped hole in this film. The ending is like those ‘but wait, there’s more…’ offers from infomercials and it feels more like a syndrome of practices that are becoming an irritating norm.

Independence Day: Resurgence takes pleasure in knowing exactly what it is, flaws and all, and it makes no apologies for trying to recapture a little of the 90s blockbuster aesthetic of its predecessor.

← Warcraft, what is it good for? Absolutely nothing
Ghostbusters lights em’ up →