Warcraft, what is it good for? Absolutely nothing 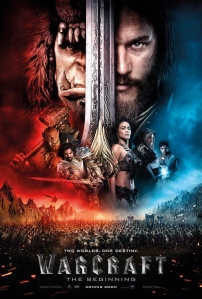 The odd thing about films based on videogames is the desire to choose the passive path when engaging with something drawn from an interactive medium. Why be the witness when you can be the protagonist? Playing through a videogame requires a level of participation distinctive from how we engage with literature and theatre. You may know the outcome of a book or musical but there’s curiosity around how a filmmaker is going to adapt the elements so it’s easy to slide back into that world as a passenger to digest it again, and maybe, discover something new about the text. The videogame experience feels complete, it’s as if you’ve directed your own version of the story, in third-person games you can select where the camera sits to create your own hero shots and videogames have grown far beyond the bleeps and bloops of Pong; they are more cinematic, immersive and certified as a storytelling art form.

The control you have over a videogame is removed when it’s adapted into a film, even for non-gamers there’s the choice to play the game or see the film, heck, even watching someone playing a videogame is now niche entertainment and the website Twitch proves it—streaming video of people playing has amassed 1.5 million users with 100 million views per month so the medium has an allure even though the power is removed. As the pre-show advertisements rolled at the Warcraft screening I attended, there was a commercial for an upcoming expansion pack in the World of Warcraft videogame series (the film is based on) and a guy sitting nearby commented, “this looks so much better than the film we’re about to see”. Even he was earning to mash keyboards, and the sentiment turned out to be prophetic as Warcraft, overloaded with, well, everything, landed with a submissive digital splat.

In a fantastical realm, refugee orcs travel to Azeroth via a portal because their home world is dying. They plan to conquer the place using brute force and sorcery but an army of humans and other magical races stand in their way. The plot of Warcraft, scripted by director and co-writer, Duncan Jones (Source Code), and co-writer Charles Leavitt (In the Heart of the Sea), is a patchwork of the opening scrolls from the past three-decades of fantasy cinema. Even the actors—in a pact of communal career suicide—deliver the lifeless, exposition heavy dialogue as if it’s about to fade into oblivion.

Warcraft is hyperactive, but it has nothing to do with vibrancy, it’s irritating like a jittery eight-year-old channel surfing. Whenever Warcraft settles into a moment to allow you to grasp what the Hell is happening, Jones goes for a hard fade into the next scene to establish the next round of world building gibberish. And it’s admirable of Jones to allow Warcraft to storm ahead the way it does with faith in our ability to keep up with the pace but there’s never time to soak in the dwarfs, elves, orcs, mages, people with laser eyes, royal families, magical demons, Glenn Close, clans, oh my! A character rides on a griffin towards a majestic floating castle in the sky but it’s gone in a flash; an orc carries an enormous hammer etched with ancient runes but it’s only a blur when swung around; and the fight sequences are edited together so frantically that it’s over before you can figure out who’s fighting each other.

Industrial Light and Magic are better at crafting portraits in Warcraft than anything in motion. The computer-generated orcs are magnificent when they are still but as soon as they start moving it’s all digital head banging. Put the orcs running together in a group and it looks like chunky pea soup. The relief is that a majority of Warcraft is flamboyant with its use of colour and it’s a shame the film never rises to the vivacity the world projects, especially when you consider how rare it is to have these hues pop when most modern blockbusters are drained of colour.

The videogame industry’s big trade show, E3, just took over a chunk of Los Angles for 2016 where every major company with a stake in the business announced their new offerings with a big emphasis on virtual reality gaming. Before Warcraft had a chance to establish itself, it’s already a relic as technology begins to advance the way we’re immersed in stories by videogames. It’s only the captivating nature of cinema that can split the mediums to justify the existence of an adaptation and there’s none of it in Warcraft.

← Girl Asleep gets bittersweet with maturity
The Dream of the Nineties is Alive in Independence Day: Resurgence →