The Caged Heat of ‘Deadpool’ 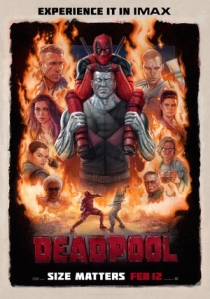 How do you hide that another comic book movie is being churned out with an origin story, revenge plot and a bland destructive finale? With jokes, of course, meta-jokes that will seem fresh to anyone under the age of 15 years old. We’re so far down the spandex coated rabbit-hole now that a superhero film like Deadpool can exist, and it’s a slight relief from serialised ‘cinematic universes’, but it doesn’t want to be branded as a superhero film and reminds you of this relentlessly. And here comes the rub, despite Deadpool’s efforts to deconstruct the genre, it’s a slave to the conventions of the Marvel movie machine (even though it’s under the banner of Fox’s comic book stable, not Disney’s) and the best it can do is offer self-referential gags and the odd violent thrill before revealing its point of difference is not so different from the rest.

Wade Wilson (Ryan Reynolds) is a mercenary who falls in love (Morena Baccarin not playing the damsel in distress who is actually a damsel in distress) right when he gets cancer. A secret organisation offers to cure Wilson’s disease with a series of experiments that will give him mutant powers. It works, but Wilson is left for dead and horribly disfigured by the architect of the project, Ajax (Ed Skrein), and Wilson’s plan for revenge and all the superhero trimmings aren’t far behind.

Deadpool is an expensive in-joke and Fox have made enough shonky comic book movies (X-Men Origins: Wolverine is a prime target) that their investment in an off kilter character like Deadpool/Wade Wilson seems like a mainstream acknowledgment of their failure—as long as it’s on their own dime. Deadpool endlessly riffs like an episode of Family Guy and has a joke hit rate of a Comedy Central celebrity roast. If anything, Deadpool provides a cathartic stress release from the monotonous dreck in the superhero genre. And comedy is subjective, sure, and screenwriters Rhett Reese and Paul Wernick weave in the fourth wall breaking wit and indulge in rapid-fire juvenile gags; wildly firing everywhere in hope of hitting something. Reynolds carries it in the Jim Carrey style the foundation of his career is built on and his sarcastic energy (mostly in voice only) allows Rhett and Wernick’s comedic sensibilities to thrive.

The real difference Deadpool makes is not in its humour or pulpy violence but its economy with time. Director Tim Miller blitzes through the same-same superhero plot and puts enough ‘pow’ in the smashing action sequences that are edited to perfection by Julian Clarke. Miller’s background is working as a visual effects creative on Scott Pilgrim Vs the World and he drive the design for the opening credits of David Fincher’s Girl with the Dragon Tattoo (easily, the best thing about that film) and there’s a nice videogame style flourish to the action that works for the antics of a comic book character brought to life on film; rather than the overused gritty aesthetic of whatever Christopher Nolan touches.

Deadpool tries to rebel but it’s as insubordinate as a kid wearing a Megadeth T-shirt to Church on a Sunday. This is caged heat that never truly thrives the way it should but it’s an okay break from saving the world.

← Clearing blind spots: The Planet of the Apes
Clearing Blind Spots: The Beatles on Film →

One thought on “The Caged Heat of ‘Deadpool’”