Clearing blind spots: The Planet of the Apes

Each month I dedicate time to clearing film blind spots in an attempt to be a better film person. January 2016 was dedicated to watching all the films in the Planet of the Apes franchise, half of them I hadn’t seen.

Spoilers for the franchise lay ahead.

A revisit for the purpose of setting the stage for the Apes films in the series I had never seen. The major takeaway from the film in our culture is that ending—it’s the ending that has defined the expectations of science-fiction cinema of this caliber since the late 60s. The final moments of The Planet of the Apes unlocks the film’s great mystery but this defining trait of the film overshadows the schadenfreude at the centre of the film that opens up on repeat viewings. Astronaut George Taylor (Charlton Heston) gets a strange dose of wish fulfillment; he’s a man who is tired of mankind. During the opening monologue Taylor says:

“…the men who sent us on this journey are long since dead and gone. You who are reading me now are a different breed—I hope a better one. I leave the 20th century with no regrets. But one more thing—if anybody’s listening, that is. Nothing scientific. It’s purely personal. But seen from out here everything seems different. Time bends. Space is boundless. It squashes a man’s ego. I feel lonely. That’s about it. Tell me, though. Does man, that marvel of the universe, that glorious paradox who sent me to the stars, still make war against his brother? Keep his neighbor’s children starving?”

Taylor agrees with the Apes about humans before he meets them for the first time. In a scene before the Apes appear, Taylor says:

“’I’m a seeker too. But my dreams aren’t like yours. I can’t help thinking that somewhere in the universe there has to be something better than man. Has to be.”

Once you know the outcome of the film you can see the way Taylor is continually set-up for that beach smashing finale. One of my favourite moments is when Taylor talks about his life before he left Earth for the stars:

“Imagine me needing someone. Back on Earth I never did. Oh, there were women. Lots of women. Lots of love-making but no love. You see, that was the kind of world we’d made. So I left, because there was no one to hold me there.”

Heston’s macho performance compounds these statements to allow Taylor to tread the line between cynic and optimist while still representing the all-American astronaut shot through space and time—the Apollo era astronaut was the apex of American achievement at the time.

A great reminder on this revisit was the wonderful cinematography of Leon Shamroy. The first half is Taylor and his crew navigating what is thought to be a mostly barren alien planet and Shamroy captures the sparseness on an epic scale. For some reason, my memories of Planet of the Apes visually (beside the unforgettable final shot) are on the interiors of Ape City and the special-effects makeup of the apes. I forgot how immense this film gets with its vistas, and how small Taylor and his team look against the backdrop of deserts and mountains—what we think is undiscovered country—but we’re soon to learn it’s that way because we blew it up.

A first-time watch for me and I had been led to believe the original run of sequels were not as good as the first film—I was so wrong to believe this statement.

Beneath is a fantastic sequel that manages to completely stand on its own merit as it dives deeper (literally) into what became of mankind. The answer: telepathic mutants who worship an atomic bomb capable of destroying the world that sits on an altar. Yes, there is an atomic cathedral. Cold War paranoia and a serious hangover from the Cuban Missile Crisis permeate through Beneath’s plot and takes the themes associated with these events to the extreme. The atomic cathedral is just as mesmerising as the decrepit Statue of Liberty from the previous film. And the whole time I was thinking about how the series could top that first ending and, oh boy, did Beneath deliver, not just with shock, but utter bleakness as Taylor (Heston) hits the switch on the bomb and detonates the planet. The final voiceover says it all:

“In one of the countless billions of galaxies in the universe, lies a medium-sized star, and one of its satellites, a green and insignificant planet, is now dead.”

Another first-time watch and I was intrigued as to how they were going to continue the series after Earth became space dust in Beneath and I was not disappointed. Screenwriter Paul Dehen cleverly begins the film with a twist as a familiar looking spacecraft from Planet of the Apes crashes into the ocean and three astronauts emerge wearing their helmets as American troops surround them. The astronauts remove their helmets to reveal they’re apes: Cornelius (Roddy McDowell), Zira (Kim Hunter) and Dr. Milo (Bradford Dillman). The apes arrive on Earth in 1973 and Dehen takes the opportunity to present Cornelius and Zira as a minority (this allegory continues throughout the series) beleaguered by the WASP-y American government officials who want to know why apes came to be the dominant species on Earth in the future.

Escape superbly ponders the notions of fate and destiny as the presence of the apes makes world leaders paranoid. Cornelius and Zira start out as celebrities (this is as lighthearted as the series gets) but soon the fear grows as their existence—and the revelation they are about to become parents—is the beginning of the chain of events that will lead to the rise of the apes. There are so many great hypotheticals over what is the right thing to do and Escape is littered with moral grey areas. Dr. Otto Hasslein (Eric Braeden) chomps into ethical monologues before revealing himself as the villain.

While the Apes franchise is known for its bleak endings, Escape takes the gold medal for its shocking two-hander reveal in the final moments—the demise of Cornelius, Zira and an infant ape is heartbreaking. The gutsiness of Escape—for a mainstream Hollywood franchise—to commit to this ending is an admirable anomaly rarely repeated to maximum effect in the history of studio productions. I never thought I’d be destroyed emotionally by a baby ape saying “mama” but I guess there’s a first time for everything. 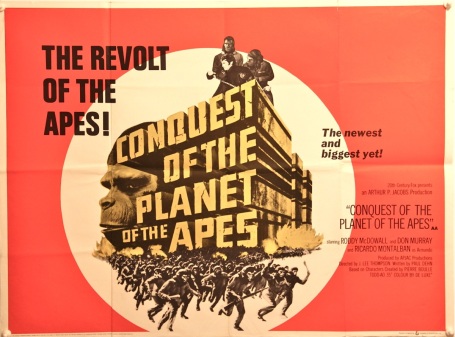 Set 10-years after Escape, ape slave labour is a huge part of American society under the strict rule of a police state. Apes are brutally conditioned to obey humans and this oppression leads to a riot led by Caesar (McDowall), the son of Cornelius and Zira, who has been living in secret until he is sold into slavery.

Conquest is built on racial tension with the producers referencing the real events of the Watts neighbourhood riots of 1965 in Los Angeles as an inspiration for the plot. Conquest simmers with hatred and there’s a fascinating character arc for Caesar as he loses faith in the humans, becomes radicalised, and plans a rebellion. Again, the humans can’t help but bring about their own destruction, and the riot that serves as the finale is an immense pressure release. Caesar’s war cries are furious as he rallies his ape troops and the outcome is electrifying as you witness the birth of the planet of the apes. 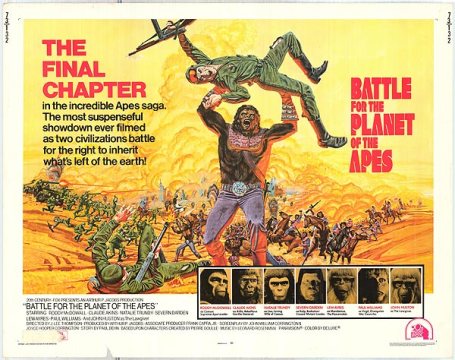 The last of the original run of sequels and it’s ever so slightly the weakest of the bunch. The plot focuses on Caesar (McDowall) trying to negotiate peace with the humans, years after nuclear war has destroyed civilization. A gorilla general, Aldo (Claude Akins), opposes Caesar and plans a military coup while a group of mutant human survivors living in atomic rubble declare war on Ape City. Also, another ape child dies (this series!) and there are a lot of ape politics.

Battle is overloaded but it’s still satisfying in how it examines the apes coming to terms with the mechanics of their society. Battle also brings closure to the time travel paradoxes of the series as it concludes with apes and humans coexisting—you finally get a peaceful ending that opts for hope in what has been series that emphasises the hopelessness of mankind and the apes.

I had only seen Tim Burton’s remake once but it felt like one too many times. Upon revisiting the film I realized how much worse it was. Burton doesn’t understand the pacing of the source material to reveal a planet ruled by apes. It blitzes through plot points for the sake of getting to the next action sequence where wire-work has the apes flying around like cocaine fueled production of Peter Pan. The odd thing about the original and the remake is that you side with the apes a little in the 68’ version (and the schadenfreude), but in the remake you’re expected to cheer for the bland human characters against the overly evil apes—Tim Roth’s performance as the lead baddie is all extreme grunts and thrusts like he’s eternally in heat. Burton’s film is all spectacle and design with zero time to ponder the potent ideas at play in the source material.

Now having seen Conquest and Battle it makes sense why they were both used to relaunch the franchise with Rise and Dawn as prequels to launch into a new age of Apes films. While Rise and Dawn are technically proficient films that deliver the huge spectacle the films of the 70s couldn’t, I still prefer Conquest and Battle a little bit more. Rise is the weaker of the two modern films with its emphasis on explaining every element of what lead to the apes becoming intelligent, it’s more a tale of science gone wrong than the self-destructive nature of mankind. I believe there is room for both ideas in each film but the polish of Rise makes the ideas less potent.

Dawn is the film Battle should have been as it executes the rivalry and sociopolitical dynamics of the burgeoning ape society well while showing the violent clashes between the surviving humans and the apes trying to make peace. I wrote in my review of Dawn, “…it’s the smashing opening sequence from 2001: A Space Odyssey fleshed out to hit blockbuster beats.” I still think this is true and in Dawn is that rare blockbuster that’s compelling and thoughtful.

I didn’t expect to walk away from watching a majority of these films for the first time as a fan but I knew within minutes of Googling to see what collectibles were available that I was ga-ga—especially for the original run of sequels. The Apes franchise is a consistently great series that’s only major hiccup is a horrid remake (seven out of eight slays most franchise competition for quality).  I was most impressed by the way the each film transformed into something new while maintaining the aesthetic, thoughtfulness and tone of the series, and occasionally, ripping my heart out with the ending.

One thought on “Clearing blind spots: The Planet of the Apes”