How to Get Rich with a Conscience in The Big Short 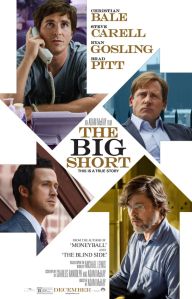 The Big Short is a nod along film. Knowing the outcome of the Global Financial Crisis (GFC) of 2007/08 and its catastrophic fallout, the narrative is defined by an eventuality so the emphasis of the story moves from ‘what happened’ to ‘how it happened’. In the case of The Big Short it also includes the ‘who’, as in: ‘who knew it would happen’. Due to these factors you can nod along with the course of action the characters, and their disgust for the system, as they bet against the American financial system with the prediction the GFC will happen (financial professionals are played by Steve Carrell, Christian Bale, Ryan Gosling, John Magaro, Finn Wittrock and Brad Pitt—all in top form).

The Big Short is righteous because it leans into common sense with the liberty of historical reflection and it becomes repetitive as a consequence—there’s no true sense of discovery—but it’s compelling between the cracks. As it crosses-off dates on the calendar of its true story milestones (based on the book of the same name by Michael Lewis), co-writer and director Adam McKay traces the outline of the corpse of America’s financial system.

McKay’s style evokes the financial themed, fourth wall breaking style of Martin Scorsese’s The Wolf of Wall Street, but it’s closer in flair to a Danny Boyle film with its frenetic editing and multimedia mash-ups (think Trainspotting and 127 Hours). McKay’s film is acerbic for its topic when it takes the emphasis off the main characters to showcase what dominated American culture in the lead up to the GFC. Montages of popular music, reality television, blockbuster films, junk food commercials and more, make the approaching cliff of the GFC feel real. McKay is also well attuned to the hopelessness of the situation and how these financial gurus are investing in a worst-case scenario and will profit as a result. The Big Short sits on the Mount Everest of moral high ground—as it should against the crooks of Wall Street—so its conscience chooses to highlight the injustices over its main characters getting rich. In these moments, McKay gets to drop knowledge on the banking system and how it works using celebrities (appearing as themselves) to break down the concepts like the hippest commerce studies teacher ever. It’s a neat way to breakdown the financial jargon and terminology but The Big Short too often feels like a prestige PowerPoint presentation. It’s informative, but never feels more than a cramming session before a big exam; the enlightenment is a necessity for disgust but it disintegrates from your mind as soon as you exit the cinema.

What endures in The Big Short are the images of the people hurt most by the GFC. McKay doesn’t get saccharine but a short cutaway to a family living in their car speaks more than any of the grandstanding the film does about the broken system. Essentially, The Big Short is about how to get rich with a conscience and it’s a film that’s as bittersweet in execution as its subject.

← The Hateful Eight is the Right Kind of Trouble
Clearing blind spots: The Planet of the Apes →