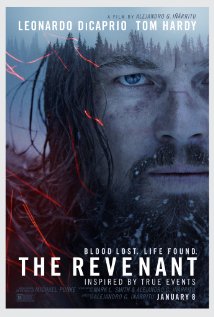 If a teacher asked a group of eight-year-old boys to act out what they think it means to be a man, you’d probably get a lot of staged fighting, grunting and killing—little boys love to play war like cavemen. So does co-writer and director, Alejandro González Iñárritu, and his band of boys (Leonardo DiCaprio, Tom Hardy, Domhnall Gleeson and Will Poulter) in The Revenant. Iñárritu’s battlefront is the beardy world of frontiersmen (manly men, men) in the wild of the 1820s on a fur trading expedition that becomes an epic survival quest for explorer, Hugh Glass (DiCaprio), loosely based on the novel of the same name by Michael Punke.

The Revenant is a masculine endurance test for how much man-on-man savagery you can take in a film dedicated to putting a white-male movie star in peril (but you know he’s going to last because he’s a white-male movie star). It’s a prestige action film that’s shallow in its attempt at depth. Iñárritu shows men as a grotesque stain on nature—there’s the continual massacre of flora a fauna in this film that’s quite apt—but he wants it both ways with cuts to shots of men staring at trees and chasing ghost wives as if to evoke Terrence Malick in the worst possible way. The posturing toward nature feels like something film students try to get out of their system in the first year of their studies, which is a real shame because cinematographer, Emmanuel Lubezki, using only natural light, captures the snow-covered mountain region where the film is set so beautifully that you’ll wish there wasn’t a man around so it can remain untouched. Oddly, Iñárritu has horribly rendered digital animals pollute Lubezki’s frame and damage the naturally lit aesthetic to make it look like one of those Buck Hunt shooting videogames trucker-hat bros play in dive-bars.

A one-take shot of a siege on Glass’ group in the opening moments of The Revenant is an example of the technical proficiency of the film—with a budget in excess of $130 million—which is where it impresses the most and makes you think for a second that DiCaprio’s character may be in danger. There’s also a bear attack sequence that doubles as the craziest metaphor for DiCaprio and his relationship with the Oscars. The Revenant does represent DiCaprio’s quest for awards season justice—there’s even a moment where he stares directly down the barrel of the camera with eyes that say ‘for you consideration’. DiCaprio is excellent despite the reek of desperation, but with the run of performances he has been giving over the past decade, the awards denial may be more of a blessing than a curse. Hardy does his amazing disappearing into a role act and it’s sublime whenever you can hear what he’s saying—add Iñárritu to the list of filmmakers too scared to give Hardy an acting note to open his mouth. In general, the whole cast grunts and wears beards weaved from pure testosterone to overemphasise the male posturing of narrative that’s one ruler away from a dick-measuring contest.

A fellow film critic, Luke Buckmaster (read his review), wrote to me about my initial reaction to The Revenant on Twitter and said, “Do we see too many films about men? Absolutely. Should we stop sophisticated films exploring masculinity? No.” I partly agree with Mr Buckmaster, but The Revenant flounders between aspiring for sophistication but getting muddled in the same-same narrative beats associated with the darkness of mankind from the brutish male perspective. I’m not asking for an optimistic reprieve, the horrid nature of man is more than well documented, for as long as men keep making films, there will always be men in the wild flexing their masculinity: The Martian, The Grey, Alive, 127 Hours, The Edge, Cast Away, The Way Back, Into the Wild, The Road, All Is Lost and The Flight of the Phoenix. Sure, keep making these films, but aspire to transcend the ideals of playground machismo so prominent in The Revenant.

← Clearing blind spots
One more thing about The Force Awakens →

20 thoughts on “Review: The Revenant”