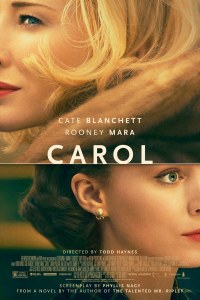 Carol is an invitation. An immaculately crafted summons to sit at the table with Therese Belivet (Rooney Mara) and Carol Aird (Cate Blanchett) and eavesdrop on their relationship. Director Todd Haynes opens the film by using the camera as an outsider, a man, glancing across a dining room. Haynes switches to the man’s point-of-view as he scans the room, Therese and Carol are shown from a distance deep in the conversation. The man moves toward them and acknowledges Therese, a moment of male intrusion—one of many heterosexual disruptions in Carol. Based on glances and gestures, speculation runs wild about the nature of the conversation and the interruption could be permissible as a crime based on the way Therese and Carol look at each other. As Carol leaves, she places her hand on Therese’s shoulder, a moment captured like an exploding exclamation mark rather than a light touch. Carol begins with the beats of body language but after spending time with Therese and Carol flashbacks, Haynes arrives back at the dinner table toward the end of the film and we are now honoured guests; no longer strangers. Haynes makes everything seem like it’s moving in slow motion as Therese and Carol have the kind of discussion that usually results in someone never seeing another person again. Carol, bookended by the grazed surface of the relationship and full immersion, makes it an absolute indulgence of intimacy, romance and the complexities of queer relationships in conservative 1950s America.

Haynes and screenwriter Phyllis Nagy (adapting the novel The Price of Salt by Patricia Highsmith) create a demanding hetero-American culture where Therese and Carol are being held to a standard of straight perfection that aligns with a similar aesthetic of the television series Mad Men to which Carol is certainly a blood relative. Therese is a shopgirl in the toy department of a fancy Manhattan store where eternally unhappy, rimmed glasses wearing managers inforce strict store policy to project the perfect life to waspy customers. Therese is shown reading an employee manual on her break that carries the title of terrible corporate self-improvement book to ensure employees are made of the right material. Carol’s slavery to flawlessness is in matrimony and the upper-class lifestyle her husband (Kyle Chandler) is desperate to protect. Carol’s husband loves her, it’s just not reciprocated, and Nagy doesn’t demonise the husband much until it’s time to show the terrible things people will do in the name of love.  Carol is shown to be playing the game, faking the smiles for other couples, dancing with her husband at parties to appease everyone. Carol takes an interesting stance on conformity in the context of the 1950s setting as a form of camouflage. Haynes acknowledges the queer subculture as an accepting refuge, which becomes especially important for Therese who is finding confidence in her sexuality for the first time and beginning to shun the expectations of society. Carol seems ready to finally start her life but is fatigued by the dynamics of her family and heartbroken by how it affects her young daughter. Love in all its forms is a dominant theme and these aren’t heartless characters choosing to run away from their problems into the arms of a relationship. All the characters have this light and shade which makes them feel like real people you could walk out of the cinema and meet on the street. Blanchett exist in a different realm to other actors and Carol pushes her further into another dimension of brilliance. Whenever Blanchett turns toward the camera there’s an urgency to divulge your deepest secret because you feel guilty for not reciprocating her honesty and weariness. Mara is forever enamoured by the world around her and never seems to blink (it’s hard to remember if she ever has in her career to date). Mara’s optimistic charm combined with Blanchett’s seductive lethargy is where their characters burst to life as a romance flourishes, stumbles and reaches a crossroad.

Haynes crafts a visual language that enables Therese and Carol to communicate amongst the conservatives and there’s something uplifting about these characters defying the norms to be true to themselves, and sexuality plays are huge part in that development, yet our society has made it a chore for people of differing sexual orientations to find peace. There’s also the question that sexuality is, and always should be, none of anyone’s business—why does disclosure matter? Haynes shows the hetero world crashing in on Therese and Carol at every opportunity as their relationship flourishes. They are interrupted (mostly by men) at dinners, on a road trip and even during sex. It’s a reminder of the world we live in and it’s where Carol gets contemporary. The power structures of Carol are not so different from life in 2015 and it’s where Haynes’ film becomes more than just a period piece.

It feels like a failure to not properly acknowledge the work of cinematographer, Edward Lachman, because an entire thesis may be required. Lachman makes the 1950s look immaculate but there’s a chill in the atmospherics (due to the winter/Christmas setting) that aid the unease of a world unaccepting of two women in love. There’s a fireside warmth to all the interiors and a glaring grey sheen to everything outside—comfort inside and inhospitable out. Sometimes there are scenes in Carol look like a colourised version of an old black and white movie crossed with the hand painted cover of a pulp noir novel, it’s magnificent.

The imperfect reality of world aspiring for perfection synchronises beautifully in Carol. Prepare to be infatuated, you may need a cigarette after.

One thought on “Review: Carol”