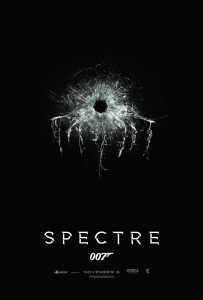 The James Bond film franchise is over 50 years-old and with the release of Spectre it’s now 24 films deep (25 if you include the generic brand Never Say Never Again). Commerce dictates that Bond will return, but the character is at a quarter-life crisis moment in the fight for relevancy—what does a Bond film mean in 2015? Bond films are similar to AC/DC albums—the same riffs with different lyrics. Bond in 2015 must navigate outrage culture, audiences craving for a Facebook hit mid-screening, and the demands for a more progressive take on the character. Bond can move with the times but he has never been a definite reflection of the times because he’s like a cat that hates having a bath. The modern Bond films have been self-aware of the character’s status as a relic and each film in the last decade-and-a-half has worked overtime to make that point, as stated by M (Dame Judi Dench) in Goldeneye, “I think you’re a sexist, misogynist dinosaur. A relic of the Cold War…” It’s fitting that the central drive of Spectre has Bond fighting for relevancy and director Sam Mendes makes a stunning case for why Bond still matters.

In the fallout from the events of Skyfall, Bond (Daniel Craig) goes in search of the mysterious organisation known as Spectre (headed by Christoph Waltz with Dave Bautista on henchman duties as Hinx). On the home front, Bond, M (Ralph Feinnes), Moneypenny (Naomi Harris) and Q (Ben Whishaw) all face unemployment as new Centre of National Security (represented by Andrew Scott as C) threatens to shutdown MI6 and the 00-Section in favour of global surveillance and drone technology.

So, it’s blaringly obvious that the Centre for National Security is a substitute for the American National Security Agency (NSA) as Spectre takes its cues from warnings about surveillance that may have spilled from the mouth of Edward Snowden himself. Bond is dealing with a level of modern paranoia that ties in nicely to what threatens the livelihood of the character and democracy he protects. It’s stated many times that 00-agents are worthless in the field compared to the might of the computer power of a surveillance network—it’s comparable to how the digitised age of bombastic digital effects driven blockbusters could make the Bond franchise obsolete; it’s similar to how Mission: Impossible – Rogue Nation was sold on the fact that Tom Cruise is actually hanging off an aeroplane as it takes off.

We not only see Bond challenge the Big Brother mentality in the fight for significance, Mendes has him walking with the dead, literally, as he’s dressed as a skeleton (a nice nod to Live and Let Die) walking the streets of Mexico during the Day of the Dead festival in the stunning opening sequence. As the chase in Mexico escalates to a moment where a helicopter is out of control with Bond on board, there’s a moment to pause and see Bond as a harbinger or death to not only henchmen, but the crowds of people below as the helicopter blades threaten to slice and dice—the potential for collateral damage and the recklessness of 007 is on full display. We see Bond scrape by, but there’s a feeling that it may the last time his actions are tolerated on a level accepted in a Bond film. In the next scene M stacks up all the newspapers (hello, outrage) reporting the incident with a stern warning to Bond that it’s no longer the way the agents operate because they’re on the way out.

The message to Bond to not be Bond, so he goes on a mission to find out more about Spectre that doubles as a quest of defiance as he burns rubber in the face of the almighty during a car chase through the streets of Rome and into Vatican City where it crescendos operatically as St Peter’s Square rises in the foreground and Bond skids past St Peter’s Square. It’s a gallant statement from Mendes that manages to jive with the confidence of the franchise as Bond ejects from his Aston Martin DB10 and floats down to the streets of Rome effortlessly shedding his parachute. Spectre is full of these moments and it’s an absolute blast experiencing Craig imbue the character with the full spectrum of Bond swagger after emerging from a mostly dour origin narrative spanning three films (Casino Royale, Quantum of Solace and Skyfall). Mendes does let the camera do a little head banging during the action sequences and you pray for a steadier hand, but when the camera does rest, cinematographer Hoyte Van Hoytema’s eye for the iconic cut of Bond’s suited silhouette against amazing vistas that adds nothing but class. Van Hoytema continues the tradition of sumptuous cinematography being the epitome of the Craig era.

While Bond spends a majority of Spectre trying to prove his worth, it’s the villain that exposes the film’s gaping lapse in finding a foe that’s a threatening equal. A committee of screenwriters (overlapping each other with re-writes, no doubt) including John Logan, Neil Purvis and Robert Wade, and Jez Butterworth, allow the story to fall prey to the kinks of modern plotting. There’s a painful need for everything to connect, as if to satisfy the Gods of logic and morons who make YouTube clips citing ‘everything that’s wrong with a movie in 8 minutes’. All the stakes built around Waltz’s villain are inconsequential and are brushed off so easily by Bond in place of a ticking clock finale that relegates Léa Seydoux to a damsel in distress. Speaking of Seydoux (playing Bond’s female companion for the film Dr Madeleine Swann), there’s a genuine attempt to make her more of an equal as showcased in a scene where she’s shown how to use a gun. During a splinter busting train fistfight (a nod to From Russia With Love, look, there are a lot of references to the series) between Bond and Hinx she’s shown to be essential to his survival but the character is undercut by side-saddle activities associated with the tired notion of a ‘Bond girl’. Even the excitement of Monica Bellucci appearing is nixed by an appearance that clocks in at Usain Bolt speed.

The case for Bond in Spectre may get muddled but it’s an exhilarating entry into the series. As for why does Bond still matter? The conclusion seems to be that Bond is in the eye of the beholder. There’s something entrancing about the fact that Bond will return and overcome the odds once again, it has become a cinematic ritual, and it’s stacked in Spectre. We also all take away something different from the 24/25 film run and there are times when the films have been a thrill or induced groans—Spectre manages to do both in style.

← I Rewatched Every James Bond Film Ever And Ranked Them
Review: Creed →