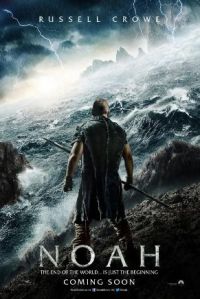 Pet owners are always trying to sneak their animal’s medication by hiding it in their meals. Filmmaker Darren Aronofsky uses the same strategy with Noah by smuggling potent existential ideas into a film with a blockbuster mentality.

Noah (Russell Crowe) is called upon by the Creator to save creation before an apocalyptic flood arrives to destroy mankind.

Disclaimer: I’m not well versed on the Bible or scripture. I’m here to talk about the film. Aronofsky and co-writer Ari Handel (screenwriter John Logan also worked on early drafts film but is not credited) slam through creation, Adam and Eve’s feast on the tree of knowledge, and the demise of Abel at the hands of Caine. The context of the situation is established as an experiment gone wrong. Aronofsky visualises the scourge of mankind across a large continent polluting the natural world and pulsating like a cancerous lung. From this point it’s clear that people are terrible and the Creator is about to go Roland Emmerich on the populace. Juxtaposed against the evil of the world is Noah’s family unit who are peaceful nomads respectful of their environment. In one scene Noah explains to his son why they don’t pick flowers because everything functions as part of the Creator’s plan, and people must not interfere with creation. There’s nothing subtle about Aronofsky and Handel’s environmental stance that’s further cemented when it’s revealed that Noah’s clan don’t eat meat, and the film rides on that ideal as nature collides with the industrialisation of mankind. From this viewpoint the film begins to tear away from the mythical source material and moves towards contemporary commentary on the harmful effect humans have had on the Earth with the extinction of species of animals and global warming. There’s also a great deal of introspection about the nature of our existence in the scope of the universe, and you can feel Aronofsky trying to find a happy meeting at the intersection of faith and science. Noah excels when it focuses on the messages of love and peace amidst the chaos of a vengeful creator, as the allegorical story intends, rather than to be interpreted as factual.

Sadly, the film’s ideals are always swamped by Aronofsky’s (or Paramount Pictures) gargantuan aspirations to widen the appeal of the tale to give the story a fantastical mainstream appeal with elements that feel borrowed from Peter Jackson’s Lord of the Rings trilogy. Fallen angels that appear as walking and talking rock formations known as the Watchers is where it gets silly. There’s also a large rain soaked battle sequence that looks like a low budget heavy metal music video and lots of wonky special effects showcasing two of every rubbery looking animal. The main conceit of the plot also comes undone when the elephant in the room (besides the actual elephants) isn’t properly acknowledged … incest. Each animal, and Noah’s family, will have to eventually procreate with their siblings in order to repopulate the planet and the thought of a constrained gene pool is icky, no matter how invested in the tale you are.

Crowe nobly shoulders the behemoth responsibility of keeping Noah as grounded while many of his co-stars’ begin to flail off into melodrama. Crowe ensures that Noah is a man committed to the cause and you can feel the burden of the responsibility. Effortlessly, Crowe switches between hero and villain when required, and the flaw of Noah’s blind faith in the Creator is revealed as he is tested more and more.

Aronofsky’s visuals are impressive, and he creates visceral dreamscapes where the Creator communicates to Noah about his plan for a clean slate with a chilling underwater graveyard and a violent mob scene where an animal is torn to pieces by a rabid throng of people. There’s also captivating natural scenery with mossy green mountains sitting beautifully amongst scorched earth to create more wonder about creation in the shadow of mankind. Despite the compelling visuals, something feels a little awry during the outbursts of violence, and you get a sense of meddling on behalf of Paramount. The fight between the director and studio over the final cut of the film has been detailed in the media and it’s worth questioning the impact this may have on the final cut. Aronofsky portrays a majority of the human characters as a murderous race but the camera is always flinching away from any bloody outbursts. There is no doubt that this sullies the impact of what Aronofsky is trying to communicate about the demise of humanity.

Noah is a colossal film and there is an Aronosfky film bursting to get out from underneath the trappings of a production that cost in excess of $125 million. While Noah is burdened with great purpose, it is rich with ideas.

Leave a Reply to Three Rows Back Cancel reply