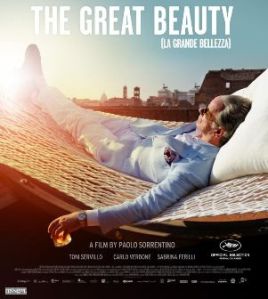 The Great Beauty is ripe for arty Euro film bingo. Cryptic religious imagery. Tick. More bare flesh than the nude Olympics. Tick. A dwarf. Tick. Before yelling “bingo” on co-writer/director Paolo Sorrentino’s new film it’s worth digging a little deeper into the ethereal grace of his exploration of life in the shadow of Rome, Italy, and the clash between the ancient ghosts of tradition and the modern flamboyance of the elite population. It’s also one of the most ‘Italian’ films I’ve ever seen; passionate, satirical, and sumptuous.

Jep Gambardella (Toni Servillio) is a famous writer and socialite who is fresh off celebrating turning 65 when he learns that a former lover has passed away. The news puts Jep in a contemplative mood and he begins to reflect on life in the eternal city.

The day Sorrentino heard the news that the Italian cruise ship the Costa Concordia had capsized (although terrible) must have been a gift to The Great Beauty. There is a scene where Jep stands looking at the vessel, lying on its side in the water, an embarrassment to the nation that once ruled the sea with the might of triremes. The Great Beauty moves between these moments of sadness to boastful expressions of love as Jep ponders his existence. Sorrentino’s camera swoops around breathtaking vantage points of Rome, lovingly caressing the architecture, illuminating hidden treasures, and exploding technicolour over extravagant parties. The wonderful cinematography by Luca Bigazzi makes every frame look like an individual piece of art; even the strip clubs are presented with elegance that’s devoid of sleaze.

By placing their main character at the top of the social ladder, Sorrentino and co-writer Umberto Contarello have a wild time poking fun at the artistic establishment with deluded performance artists, child prodigies, and plastic surgeon prophets all in their sights. Not even the Vatican is safe from the snipes of the writing team as the church’s own social structure and prominence is deconstructed. The conversations between Jep and his friends are soaked in pretentiousness and the observations are scathing and witty. The results are hilarious and fall in the tradition of the great Italian satirist Dario Fo.

Amongst the madness there is cause for reflection because a 65 year-old man has every damn right to get a little nostalgic. It’s refreshing to see a character with the nobility of old age to muse on life. It’s a welcome contrast to the recent assault of films featuring people in their mid-twenties hung up on a quarter life crisis. Sorrentino and Umberto send Jep on an emotional journey across the experiences that define who he is in love, faith, and artistry. Servillio’s performance is terrific and the actor gives off the vibe of James Bond in his mid-sixties. Despite the character being a complete snob, Servillio makes Jep a fine companion in the elitist environment, and when he utters that his goal was to be the kind of person “with the power to make a party a failure” you completely understand the man’s drive. Servillio also expresses a weariness of Jep’s taste for the high-life because it’s exhausting to keep up appearances. There is a twinge of melancholy watching Jep groggily cut through the dance floor at a party, but it’s hard not to ponder whether the character is wearing his social poker face or not, a cunning performance from Servillio.

There’s a lot of flimflam in The Great Beauty. At times it’s enthralling riding on Sorrentino’s wavelength but there are moments of abandonment, and a little head scratching follows. It gets weird. Like something you’d see at the Eurovision song contest that could easily be passed off as genius, but I’ll happily admit there were sections of The Great Beauty that did not compute.

Sorrentino is waving a big Italian flag with The Great Beauty and from in the confines of his patriotic contemplations it’s hard not to connect with Jep’s uneasy relationship with his homeland and cynical compatriots.

One thought on “Review – The Great Beauty”