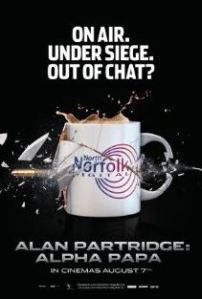 Over 20 years of existence can buy a lot of pop culture real estate in the hearts and minds of fans. Alan Partridge has conquered the world of radio, television and publishing, but with the release of the character’s first film, Alan Partridge: Alpha Papa, few may be scratching their heads thinking ‘who is Alan Partridge?’ Luckily, the comedic fabrication of actor Steve Coogan and comedy guru Armando Iannucci (creator of The Thick of It, Veep, In The Loop) stands on its own while still retaining every hilarious nuance of the character.

A radio station in Norwich, North Norfolk Digital, is purchased by a large media company that rebrands the station for a younger audience and begins to cull the older employees. One of the DJs, Alan Partridge (Coogan), attempts to negotiate with upper management and it sets off a chain of events which results in a siege.

The brilliant thing about Alan Partridge: Alpha Papa is that it’s not trying to play the populist card in an attempt to widen the appeal of the character. The screenplay by Coogan, Iannucci, Peter Baynham, Neil Gibbons and Rob Gibbons is flush with the swagger of Partridge. Coogan and Iannucci have always presented Partridge as a downtrodden British media personality in the image of iconic broadcasters such as Michael Parkinson, David Frost and Terry Wogan. The character loves the spotlight but awkwardly fumbles his way through life as an entertainer running on the fumes of fame. Partridge’s misfortune is where the humour comes from and it’s amusing watching him traverse social situations and hold together a radio show which is always one tricky comment away from disaster. The writing team takes every opportunity to squeeze in witty interactions, sight gags and physical comedy which becomes so frequent that proper laugher management is required so you don’t miss the next joke.

Most of Alan Partridge: Alpha Papa thrives on Coogan’s ability to bring Partridge to life and the actor completely fades into the character. Coogan has brilliant comedic timing and executes all the mannerisms of Partridge with the precision of a brain surgeon. Not many characters born in other media can sustain their own film (a number of Saturday Night Live character movies) but Coogan’s ability as a performer ensures that Partridge holds his own. In support Colm Meaney is excellent playing an unhinged co-worker, Simon Greenhall is funny as the radio station’s security guard and Tim Key never lets an opportunity for a bad pun to slip by as Partridge’s humorous foil Sidekick Simon.

The plot loses momentum toward the finale as the situation is drained of all comedic opportunities and there are odd attempts to continually throw Partridge into the action.

Alan Partridge: Alpha Papa is jam-packed with wit that ensures the tradition of great British comedy is still alive and well.