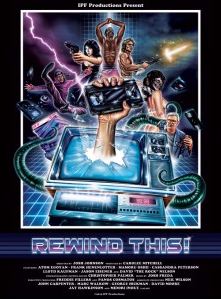 A VHS tape collector reflects on seeing the image glitch while watching a movie in the documentary ‘Rewind This’. The imperfection preempted nudity (or gore, but the odds favour nudity). The anomaly meant that someone had excessively paused or rewound the tape it so much that it left a mark. There is life and history built into each individual VHS tape that’s captured perfectly through the reflections of passionate fans in ‘Rewind This’. It’s an incredibly fun doco that delivers the perfect hit of nostalgia for generation-VHS while educating the uninitiated on an important part of pop culture history.

Filmmaker Josh Johnson assembles an eclectic mix of directors, producers, film historians, critics, journalists, video store owners and collectors to reminisce about the golden age of video. Interviews are mixed with television commercials for VCRs and Betamax players as well as clips from various movies that became cult classics in the home video market such as ‘Basket Case’, ‘Puppet Master’, ‘The Toxic Avenger’ and more. It’s great to hear the stories about the movies people discovered on VHS and the production chain that was designed to fill video stores with content when the medium picked up momentum in the 1980s, and the rise of the rental market. Everything is examined from the VHS cover artwork, the porn industry’s contribution to VCR uptake and the evolution of the format to allow people to make their own low budget films. The doco even delves into the VHS libraries of collectors who have rare tapes such as a Windows 95 instructional video starring Jennifer Anniston and Matthew Perry in character as Rachel and Chandler from the television series Friends. The real highlight is seeing the workout video ‘Bubba Till It Hurts’ featuring Bubba Smith from the ‘Police Academy’ series, especially when he tells the audience “I love you” before the workout begins. It’s too good to be true but VHS allowed for this kind of madness.

The VHS fanatics make ‘Rewind This’ special as they share their favourite memories of discovering films like ‘Deadly Prey’ and scouring video stores across a small town to find the latest film everyone is talking about.

Seeing rooms that resemble VHS museums are fantastic and a few hardcore enthusiasts have expressed their love in the form of a tattoo. It becomes apparent throughout the doco that these devotees are part of a very important movement: VHS preservation. Sadness washes over ‘Rewind This’ with mention of the rise of digital media and the physical representation of a film, like a VHS tape or DVD, completely disappearing, and it’s something that has already begun. Luckily, there is joy in seeing passionate people holding special VHS screening nights at cinemas and film festivals all around the world. In the same way that verbal storytelling once passed history down from generation to generation, these VHS lovers are doing the same with their favourite movies from the era.

‘Rewind This’ juggles a lot of different issues and the talking head format does get tiresome. Toward the end it feels like it’s running on VHS fumes in search of more to talk about, but these are minuscule gripes.

If you lived through the prominence of VHS, don’t just expect a flood of memories to come back watching ‘Rewind This’, expect a tsunami. Johnson’s doco is vital in acknowledging the historical significance of VHS and it’s a pleasure to be in the company of hardcore supporters.

← Review – Much Ado About Nothing
Review – Pacific Rim →

One thought on “Review – Rewind This!”