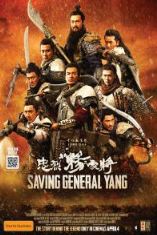 After a seven year absence the director of ‘Freddy versus Jason’, ‘Bride of Chucky’ and ‘Warriors of Virtue’ (yes, the Kung-Fu kangaroo film), Ronnie Yu is back … and as mediocre as ever with ‘Saving General Yang’.

Based on Chinese folklore, ‘Saving General Yang’ focuses on the seven Yang brothers, who are tasked with rescuing their father who is stuck behind enemy lines after going to battle with an old foe who wants revenge.

‘Saving General Yang’ is epic in nature but minute in plotting and characterisation. The tale that inspired the film is packed with themes of revenge, loyalty, brotherhood, honour and family, not to mention centuries of Chinese adoration of the Yang family’s quests but it’s mostly missing from the film. Yu manages to channel some of that greatness into the frantic battle sequences aided by lush visuals from cinematographer, Chi Ying Chari. Watching the Yang Brothers take on entire armies on their own is thrilling and there is a good mix of siege machinery such as catapults and a beautiful melee of two archers in a sun drenched wheat field.

Yu never finds the essential balance between each member of this band of brothers and there isn’t enough time to develop a bond with the siblings; which renders caring for their safety useless. They each adhere to the usual stereotypes of any war film: such as the veteran, the new parent and the rookie. If only there was a brother one day away from retirement it would have completed the whole set. There is a flotilla of father issues built into the plot that’s never fully explored beyond the Yang brother’s simply doing what any respectable son would do for their dad. They bravely punch, kick and slash their way through hordes of bad guys with but it’s nothing more than a physical display in the actors and stuntmen’s athleticism. It’s similar on the home front with the mothers and lovers waiting for the brothers to return home safely only offer longing glances over scenery with misty eyes. Even the chief villain scowls his way through a brief backstory that’s easily shrugged off without any real interest. Yu fumbles the juggling act but he’s playing with a story that could probably fill an entire saga of films.

The costuming and weaponry is elaborate but at times it feels like being stuck in the middle of a heavy metal video clip from the 1980s. This reviewer swears Ozzy Osbourne was wandering around somewhere in the background. There are a few underdone special effects used to increase the number of men on the battlefield, but it looks more like a bucket of plastic toy soldiers have been tipped onto a sandpit.

‘Saving General Yang’ is a swift hit of adrenaline and a treat for the eyeballs but not enough to provoke the heart with a battle cry.