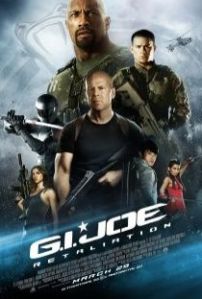 ‘G.I. Joe: Retaliation’ is one of the most despicable displays in the collision between consumerism and filmmaking. Yes, the film is based on the toy company Hasbro’s stable of action figures so it would be lofty to expect something groundbreaking. It could be easy to shrug and say “it is what it is” but there is something dangerous about a film made to sell toys using war.

Picking up from the events of the first film ‘GI Joe: Rise of Cobra’, the evil organisation Cobra frames a group of Special Forces soldiers called G.I. Joes (Joes) for crimes against America and hunts them down. The surviving Joes must fight to clear their names and bring down Cobra.

The film kicks off with a fancy Power Point presentation that delivers everything about the film with the subtly of a hydrogen bomb. It’s a sign that the film has no intention of using any of the elements that filmmaking offers to tell a story. The bad guys want to destroy the world and the ‘Joes’ must stop them. It’s hard not to fall asleep at the first sight of a shiny brief case with a big red button to control weapons of mass destruction. The action set pieces are just bombastic excuses to spruik the vehicles, play sets and figurines that will be able to purchased as toys. The undercurrent of it all is that warfare is being used as a selling point. Cartoon violence is used that’s not even bold enough to show one drop of blood or the consequences of taking a life. The message being fed to the young target audience about war, it’s okay to kill for your country as long as you’re having a wild time doing it.

A group of heroes are presented in the form of the Joes but these characters don’t deserve the title regardless of which country’s ideals they are fighting for. Director Jon M. Chu is obviously presenting the Joes as the army’s answer to superheroes but he forgot to show them actually doing any good. As an example, in ‘The Avengers’ director Joss Whedon was clever to show his super-powered characters using their skills to save innocent people, despite the chaos around them. The Joes cause is faceless and could probably be pinned onto American patriotic grandstanding such as “we’re fighting for freedom”. And what is that freedom? The freedom to shoot the candle off a cupcake with high calibre weapons as showcased in a scene with Roadblock (Dwayne ‘The Rock’ Johnson) and Duke (Channing Tatum).

It gets even worse when anyone opens their mouth. Roadblock explains his troubles past by saying “I got bounced around from home to home until this became my home”, clearly the brainpower of screenwriters, Rhett Reese and Paul Wernick couldn’t muster up a thesaurus. One villain boasts he is the “the best blower-upper” and then later makes a joke about torture saying “I tried water boarding, but I got bored”, and to think people were outraged by torture in ‘Zero Dark Thirty’, this is far worse a crime. The crap dished out by this film culminates in a scene where one of the few female characters, Lady Jaye (Adrianne Palacki) talks about how she joined the military to earn the respect of her father … while half naked. Palacki delivers the lines while the camera lingers on reflections of her backside and various states of undress. Chu probably thinks this is character development but he’s doing nothing more than filling up spank banks.

All the actors share the same characteristics with the toys that inspired their characters by being completely lifeless. A mute character called Snake Eyes (Ray Park) manages to outperform everyone in the film and you can’t even see his face. After an excellent 2012 with ‘Looper’ and ‘Moonrise Kingdom’, it appears that 2013 is not the year for Bruce Willis who follows up the dire ‘A Good Day To Die Hard’ by appearing in ‘G.I. Joe: Retaliation’ and looking completely uninterested.

‘G.I. Joe: Retaliation’ could be passed off as dumb fun but sadly you would be lying to yourself. It’s simply dumb.