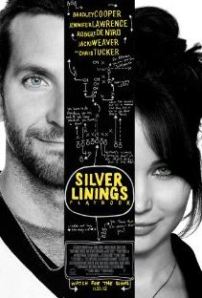 Writer and director David O. Russell indulges his broken characters in a world of crazy as a way of coping with a harsh reality in ‘Silver Linings Playbook’. Russell goes beyond the woes of the irrational and firmly implants the film in the realm family, life and love.

Pat (Bradley Cooper) is living with his parents (Robert De Niro and Jackie Weaver) after being released from a mental health institution where he has resided since the breakdown of his marriage. On the road to recovery Pat meets Tiffany (Jennifer Lawrence) and a friendship develops.

‘Silver Linings Playbook’ puts its best foot forward with a stellar performance from Cooper. Pat is a broken and he suffers from severe mood swings that are attributed to a form of bi-polar disorder. His life before institutionalisation does not hint at a person who is suffering from mental anguish though. Pat was a teacher who was happily married (sort of) that happens to suffer a breakdown. It’s heartbreaking to watch at times but Cooper gives a fearless performance as a man in distress with a positive outlook towards recovery or to quote the character “EXCELSIOR!” Cooper particularly revels in the kinetic pace of the dialogue and moves from moments of serenity to chaos seamlessly. Russell agitates the camera letting it move frenetically by swooping in and out of situations and drifting in and out of painful memories. It’s erratic but Russell’s direction helps to develop a visual representation of how Pat views the world and those around him.

The balm for Pat’s anxiety is represented by the arrival of Tiffany who is played with a beautiful fragility by Lawrence whose confidence as an actress explodes across the screen. Cooper and Lawrence have a good chemistry and it is enjoyable watching them put the pieces of each other’s lives back together despite the feisty emotional barrier Lawrence builds around her character. Pat’s support network is filled out nicely by De Niro and Weaver who show unconditional love for their son despite the sadness it brings the family. De Niro in particular shows a delicate tenderness that strips back his usual tough guy persona in amazing moments of frustration at being unable to connect with his son who he adores. There is a genuine father and son relationship between Cooper and De Niro that’s raw and very moving. Anupam Kher is funny as the tolerant psychiatrist and John Ortiz is great as the best friend who is drowning a little in his own mundane life.

The plot does meddle a little in repetition by overemphasising the plight of Pat and his eccentric ways but despite the obvious neurosis of the leads, Russell makes the point that every character seems to get through life with the aid of some kind of obsession. Everyone is crazy in different ways. It seems that the best defense in a world that constantly knocks these characters down is a little madness mixed with a lot of love and support.

Like the film’s characters the soundtrack moves between the unruly rock’n’roll of Led Zeppelin and The White Stripes, to the funky vibrancy of Stevie Wonder and peaceful folk of Bob Dylan. Russell picks songs that perfectly reflect the mindset and situations of the characters. The music becomes especially poignant during a dance sequence in the film that encapsulates the relationship between Pat and Tiffany as well as giving punch to the film’s most applause worthy moment.

‘Silver Linings Playbook’ is a bittersweet pill that’s a mixture of an endearing family drama and modern romance that’s an absolute delight.