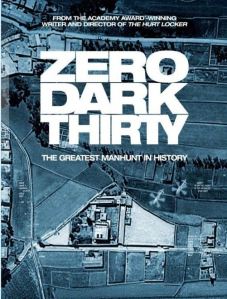 In order to fight evil one must become submerged in a wicked darkness. ‘Zero Dark Thirty’ chronicles the decade long manhunt to find Osama Bin Landen and is a dramtisation of a silent war that highlights the extreme risks a government is willing to take to bring terrorists to justice.

Forget the flair of James Bond or the grit of Jason Bourne. Director Kathryn Bigelow gets her hands dirty in the bleak world that CIA operatives inhabit; these spies are close to the real deal. Knowledge is power and the characters are masters at extracting information by any means because a simple phone number or email could prevent the loss of innocent lives. Scenes of torture early in the film are unsettling but in no way does Bigelow make it look like a glorious pursuit. It’s a necessary evil that strips away the humanity of everyone involved. The roguish Dan played by the excellent Jason Clark is an expert in the art of torture who has accepted it as a necessary evil to stop people comfortable with funding, aiding or carrying out acts of terrorism. It’s a moral wasteland but the repercussions of failure are huge. Bigelow uses these moments to amplify a mission that is failing.

Field agent Maya (Jessica Chastain) is the focus of the film and her complete immersion into the lives of the people she is trying to find is wearing her down. Like most of the agents in the film, she is a ghost who has absorbed into the system. Chastain’s performance shows hints of frailty in the beginning like the regime that is failing. Her conviction grows as the leads on Bin Laden get shorter. Chastain’s confidence seeps out of every interaction; it’s powerful stuff.

There is so much urgency in screenwriter Mark Boal’s script that at times the characters are under so much distress it’s possible an eyeball might pop out of their head. There is very little backstory given to some the main characters to give them depth. On the surface they just appear to be government types doing their public service. There is an attempt to make the mission personal beyond the tragic attacks that occupy the news, but it’s a little contrived and almost warrants a Michael Bay style dolly camera move around Chastain while she blurts “now they made it personal!” Outstanding appearances by Mark Strong and James Gandolfini as high ranking government officials remind the field agents of the far reaching implications of their work. Both men are power players who rely on their advisors to make decisions that could cause wars, yet they carry the fate of the free world in a commanding way that’s superb to watch.

Boal’s script pushes the point of human error a little too hard in the first act but it really hits its stride in the final two thirds as the situation intensifies. There are major revelations, a nerve-racking tech driven hunt through a market and overwhelming moments as the operatives reach the cusp of success. Bigelow’s direction keeps going from strength to strength tightening the tension while letting the story move at a rapid pace to a heart pounding conclusion in the film’s most shining moment: the raid. With the same precision that Maya estimates Bin Laden’s location the soldiers carry out their mission with deadly accuracy. Being embedded with the soldiers is thrilling as the Bigelow puts you in their gun sights stalking the in darkness and creeping through the eerie green of night vision goggles. Claustrophobic hallways and an unsettling silence combined with brief explosive moments of action are amazing. While it’s easy to get caught in the “HOO-HA” army mentality of the troops in action, Bigelow does pause to reflect on the carnage. There is a moment where the camera follows a solider on a tour of the gruesome reality of the situation that is a time to ponder about whether the raid is a genuine victory. While Bigelow doesn’t seem to be forcing any sympathy for the people caught in the situation, it’s a moment to think about the world we live in how a government’s response to terror…is terror.

It’s a remarkable and engaging piece of filmmaking considering the outcome of the story is well known. ‘Zero Dark Thirty’ is a sign of the times we live in and the processes put in place to wrangle the people that choose to live outside the realm of civility. Bigelow shows how the process consumes and slowly shreds away at any trace of morality.

← Review – Sleepwalk with Me
Review – Lincoln →