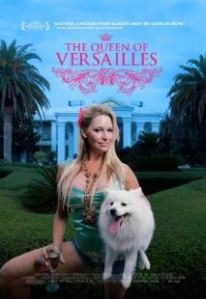 The life of a billionaire family is a microcosm for a society constantly living on credit and the banking system that enables it in ‘The Queen of Versailles’.

David Siegel is the founder, president and CEO Westgate Resorts, one the world’s biggest timeshare companies and thus one of the wealthiest men on the planet. ‘Queen of Versailles’ follows Siegel and his family from 2008 onwards as they weather the storm of the Global Financial Crisis (GFC) while attempting to build the largest and most expensive single-family house in the United States.

The life of the rich is nothing new with countless reality television shows giving fly on the wall access to people who speak of Ferrari and Lamborghini in plurals. A majority of the film is spent with David’s wife, Jackie, who acts as a tour guide through their world and the Siegels make Scrooge McDuck look like a hobo. Despite having it all the Siegels lust for more and their new mansion under construction, modeled off the Palace of Versailles in France, is the pinnacle of their excess. The excuse for building the new home is simply because the Siegels have accumulated so many possessions that their current mansion is bursting at the gold plated seams. The real reason they’re building the million dollar behemoth is because they can. At the peak of their wealth the Siegels keep pushing the boundaries with what their money allows. They can afford nannies to take care of their children so they increase their brood. They keep purchasing pets as long as they can afford a maid to clean up the mess. They invite every contestant in the Miss America pageant over for a party… because they can.

Documentary filmmaker Lauren Greenfield digs into the past of David and Jackie to give their situation context and their story plays out like a hyper American dream. David Siegel’s a self-made millionaire and it’s obvious he has worked hard to build his empire that began as just a small block of apartments on an orange grove in Florida. It would be easy to classify Jackie in the trophy wife category (even one of her children references it in the film) but there is more than meets the eye. Jackie reflects on her youth and a destiny that was headed toward life as a secretary working for IBM. Instead, Jackie gets a degree as a computer engineer that hints at her forward thinking and progressive nature. Despite a career that her education allows, luxury lures her from a cubicle and into the world or beauty pageants and modeling that puts her on the path to eventually becoming Mrs. Siegel. These are two people who may have become slightly jaded by their hefty bank accounts but Greenfield is careful not to intentionally humiliate them; as the couple does a good enough job of that themselves. Trashy Elizabethan style family portraits, stuffed pets as home decorations and limo rides to McDonalds may produce a few smirks. Even David Siegel’s claims that he secured George W. Bush a seat in the White House via questionable practices is comical. It’s clear that despite their flaws, Greenfield acknowledges the success story of the Siegels as entrepreneurs, but it’s the faults of the system that made them well-off combined with their reckless spending that is exposed in their downfall.

As the GFC hits America and the Westgate fortune begins to crumble the Siegel face hard times…sort of. It’s far from properly slumming-it but the addiction the Siegels have to their extravagant lifestyle is sickening. They become disconnected with reality and fail to face any real responsibility. With most of their housekeepers laid off the Siegels let their home become neglected. In a scene that shows how detached the family has become chasing their pre-GFC routine, the Siegel children fail to care for a pet lizard that dies thinking the hired help would have it covered. The sad image of the shriveled up reptile represents the failure for the Siegels to care for anyone or anything but themselves.

From the top of the financial chain down Greenfield reveals the impact of Westgate’s failings on its employees. Lots of people lose their jobs. Even within the Siegel’s home, the nannies who care for the Siegel children speak of supporting their families overseas with the money they earn. One nanny takes to living in an abandoned life-size dollhouse on the Siegel compound during the tough times to continually support her family. It’s a huge juxtaposition to the life the Siegels are trying to recapture that one employee can be happy living in a dollhouse knowing she’s doing it for love and not greed.

It becomes apparent that the entire business is built on credit from banks. David has mortgaged properties to pay for other properties and people are investing in timeshares by paying with credit cards. It’s a dangerous cycle of debt that the banks allow and David Siegel is quick to condemn the process despite making a fortune off the system that allowed it. The strength of ‘The Queen of Versailles’ is in these moments when the unpleasant truth about the economic situation in America is exposed. The butterfly effect displays the detrimental effects of what happens when the affluent control a majority of the wealth.

There is something oddly satisfying about watching the Siegels squirm a little with someone like Donald Trump probably being one of a few to shed a tear over their plight. Queen of Versailles is a strangely entertaining and revealing documentary about a culture obsessed with money and people aspiring to a life they can’t afford. Greed is good once again if you can borrow enough money to consume all you desire. Mind the debt gap.

‘Queen of Versailles’ has been acquired by Madman Entertainment in Australia but currently does not have a release date.

← Review – Hitchcock
Review – Sleepwalk with Me →

One thought on “Review – Queen of Versailles”