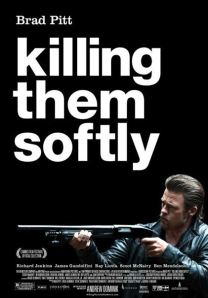 ‘Killing Them Softy’ is a case study of the Global Financial Crisis (GFC) through the prism of a group of criminals. In the latest film from writer/director, Andrew Dominik, Wall Street and the White House are replaced with shotguns and stand over men when a mob-protected poker game gets held up and an enforcer, Jackie Cogan (Brad Pitt) is hired to investigate the heist and dish out retribution.

Based on the novel ‘Cogan’s Trade’ that’s set in the 1970s, Dominik brings the story and conversations forward to 2007. Within the new time period the media buzzes with politicians giving speeches and news reports that continually go off in the film like firecracker to make sure the political message is felt. It’s a heavy a handed approach that never lets up throughout and almost sullies the intent with its heavy handedness. The failure for the US government to react to Wall Street’s economic exploitation is symbolised by Cogan’s plight and the bureaucracy he faces dealing with the criminal elite that act more like the board of a major company.

Despite the forced politics, Dominik does the underworld very well. The violence is confronting though it’s never made to look glamorous. The world of knuckle dusters and broken teeth the characters inhabit is grim and death is always waiting to claim what’s left of their soul and whatever body parts remain intact. The heist scene that sets the plot in motion is one of the most intense hold ups recorded on film, and its lasting effects are felt throughout.

Cinematographer Greig Fraser’s work gives the film a look of urban decay despite the modern setting. A rain soaked slow motion shoot out involving “bullet ballet” is a delicate approach to a moment of vehemence that visually cements the lifestyle the characters have chosen.

Pitt’s performance is a slow build that sees him go through the motions for most of the film. However, in the character’s defining final scene Pitt’s ferocious talent comes to the fore. Bolting from the gates from his first appearance is Ben Mendelsohn whose sweat soaked portrayal of a drugged up crook is captivating and awards should fall his way if there is any justice. Scott McNairy is excellent playing off Mendelsohn and James Gandolfini dusts off Tony Soprano and takes him for a little spin.

‘Killing Them Softly’ is a gripping crime drama strained by its forced politics.

‘Killing Them Sofly’ is released:

2 thoughts on “Review – Killing Them Soflty”