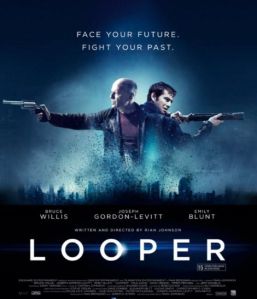 Every successful musical act eventually puts together a “best of” collection. ‘Looper’ is the time travel film equivalent of a “best of” album. Writer/director Rian Johnson excellently takes the best elements of time manipulation and brings those ideas together in a volley of bullets and drama.

In the future time travel is outlawed and mobsters use it illegally to send targets back in time where hit men called “loopers” dispose of them. A looper named Joe (Joseph Gordon Levitt) gets into trouble when one of his targets tries to escape.

Johnson cleverly picks apart time travel in cinema borrowing ideas from films like ‘The Terminator’ and ‘Back to the Future’ but completely makes it all his own. Gangster types messing around with time travel presents a few mind-bending ideas and Johnson’s script is full of concepts that would make a filmmaker like Christopher Nolan swoon as it’s in a similar mind space to ‘Inception’.

The futuristic elements of ‘Looper’ never overtake the story, which remains king throughout the film. Despite the hover bikes, tablet devices and slick weaponry, Johnson’s vision of the future is an economic wasteland with a majority of America’s population living in extreme poverty. It’s gritty and close to the reality of the financial tracking of countries around the world, especially the United States.

The action is brutal and there are lots of inventive set pieces where Johnson shows off an impressive skill for directing action while indulging the tough guy persona brought to the film by Bruce Willis. Willis is in fantastic form with or without dual machine guns throughout ‘Looper’.

The rest of the cast including Gordon Levitt, Emily Blunt, Jeff Daniels, Noah Segen and Garrett Dillahunt are all fantastic. A special mention goes to Pierce Gagnon who is the little surprise package of the film, but his part may be a deal breaker for some.

‘Looper’ is wildly entertaining and satisfying for the psyche. High concepts and explosions happily coexist in one of the best films of 2012.

28 September UK and US

← The Hobbit: An Unexpected Journey trailer #2
Review – The Imposter →