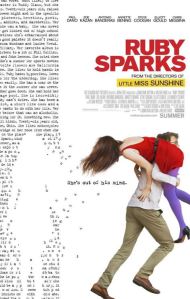 Once intellectual property rights expire or are forfeited on an author’s work they enter the public domain. Works in the public domain are free of private ownership and great writers including Jane Austen, Lewis Carroll, Charles Dickens and William Shakespeare are all listed. After a work of fiction is released and embraced by the people, it becomes owned by the public regardless of who the royalty cheques go to. ‘Ruby Sparks’ takes the idea of creative ownership and a writer’s power for invention mixing it with romantic sensibilities and a sprinkle of magic.

Calvin (Paul Dano) is a novelist struggling with writers block and finding happiness in his life after publishing a critically acclaimed novel. Calvin starts writing a new book about a character named Ruby Sparks (Zoe Kazan) who begins to appear.

‘Ruby Sparks’ tells a sweet love story in the warm embrace of directors, Jonathan Dayton and Valerie Faris the team who made the excellent ‘Little Miss Sunshine’. While the modern tale of two lovers is the nucleus of ‘Ruby Sparks’ it’s a very interesting examination of a relationship within the bounds of publishing. The crisis of holding love too tight or letting it free to flourish in the world is the main dilemma faced by Calvin played perfectly by Dano.

Kazan is charming without falling into the trap of being the whimsy hipster dream girl. The cast that makes up Calvin’s family played by Antonio Banderas, Annette Bening, Chris Messina and Toni Trucks are delightful. Elliot Gould also makes a brief but humorous appearance as Calvin’s psychologist.

Not only on performing duties, Kazan picks up a screenwriting credit and it’s a great for a large chunk of the film, but it’s questionable as to who wants to take acknowledgment for the ending. A lot of the impact of Calvin’s emotional journey is sucked out of the film via a finale that feels like a comment someone scrawled down on a test screening feedback form.

‘Ruby Sparks’ is a film projecting itself as an enjoyable indie-darling capped with a mainstream ending. Dayton, Faris and company bring Ruby to life but Hollywood ideals ruin her.