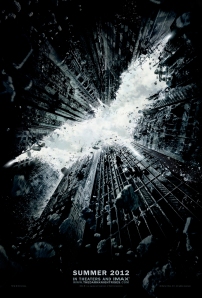 Writer/director/producer Christopher Nolan works like a card player when approaching his films. With his series of Batman movies he threw away the rule card, played his joker and now it’s time to reveal his final hand with ‘Dark Knight Rises’.

Set eight years after the events of ‘The Dark Knight’, Gotham City’s crime rates are low and Batman/Bruce Wayne (Christian Bale) has gone into hiding after taking the fall for the death of the district attorney, Harvey Dent. A masked terrorist known as Bane (Tom Hardy) threatens to upset the peace and only the Dark Knight can stop him.

So often with a trilogy the third film is an uneven fit but Nolan understands the importance of closing the story he kicked off in ‘Batman Begins’. ‘Dark Knight Rises’ slams the book shut, sets it on fire and then puts out the flames with a jar of tears. It’s a clever plot that slowly builds upon the myth of Batman as the champion of Gotham and the personal toll it has taken on Bruce Wayne. It’s the emphasis on the man and not the superhero that makes his final outing so engrossing, and Nolan’s usual flair for constructing thrilling action set pieces adds excitement. There are plenty of comic book inspired flourishes for fans, lots of surprises and an intense Hans Zimmer score that are all excellently deployed in from Nolan’s utility belt.

The scenes with Bale and Michael Caine as Alfred are exceptional and it’s a pleasure seeing two great actors ground their comic book inspired characters in a reality that reaches a Shakespearian level of personal tragedy – for Alfred in particular. Anne Hathaway has the most fun as Catwoman/Selina Kyle and her character services the story well without being dropped in the mix of the sake of tight leather.

The villainous Bane has a good presence thanks to the tree trunk like physique of Hardy but he never reaches a level of brutality expected of a feared terrorist. A comical voice and too much bad guy ‘monolouging’ of major plot points take away his grit.

The film gets a little distracted when it starts mixing in commentary around issues obviously inspired by the Global Financial Crisis that takes the story in an odd direction without pushing the plight of Wayne and Co. forward.

As the final minutes of almost seven years of the Nolan Bat-verse tick down there is an overwhelming sense of emotion in what the filmmaker has achieved and the grand scheme is revealed. ‘Dark Knight Rises’ is all about legacy and Nolan has left the world with the three best Batman films ever made with an epic final bow.