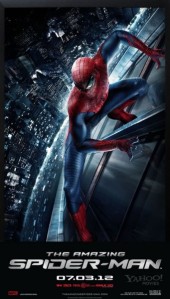 As each generation’s attention span shortens so does their memory and that’s the formula used to reboot your friendly neighbourhood Spider-man into your moody misdirected web-slinger in ‘The Amazing Spider-Man’.

Peter Parker (Andrew Garfield) is an awkward teenager who lives with his Aunt May (Sally Field) and Uncle Ben (Martin Sheen) after he’s left behind by his parents as a child. While looking for an explanation for his parent’s disappearance Peter meets his father’s old colleague Dr Curt Conners (Rhys Ifans). While snooping around Conner’s lab Peter is bitten by a genetically altered spider that gives him powers.

‘The Amazing Spider-Man’ is primarily made for people who are new to Spider-man films. Everyone who can remember the Sam Raimi trilogy will be dragged kicking and screaming back through the character’s origin. Since the film is a reboot, it’s a necessary step in re-launching the character for a new series ; but sadly director Marc Web and three separate writers (and probably more un-credited) James Vanderbilt, Alvin Sergent and Steve Kloves, miss the point of Spider-Man completely. At the heart of every Spider-Man story there has always been the burden Peter Parker carries of being a superhero and a teenager. Throw in a bit of guilt over misused powers, grief and a few daddy issues and you’re in good web-head territory. All of this is missing from ‘The Amazing Spider-Man’ and it’s replaced with a Parker family tree search via ‘Bing’ and a quest for justice interrupted by a pointless villain.

Ifan’s Conners/Lizard is the bad guy and classic mad scientist but with nothing to be “mad” about. His character provides answers to Parker’s family past to tie the story together, but once things start to get scaly, he becomes merely a detour. What could have been a fantastic ‘Jekyll and Hyde’ style villain is mishandled and his evil turn is madness in an EpiPen.

The film’s best beat lies in the relationship between Parker and Gwen Stacey (played wonderfully by Emma Stone). Awkward teen romance blossoms into something worth fighting for when Parker suits up despite what the teen superhero might have to sacrifice to protect her.

The reboot is not the best starting point for steps into a new Spider-Man franchise and there a plenty of hints at the wider story in play with eyes for Sony/Columbia to have their own fully functional Spider-Man film universe in the mirror image of what Marvel Studios/Disney did with ‘The Avengers’. There is room for improvement with potential sequels but ‘The Amazing Spiderman’ is the perilously complicated birth of a new series.

2 thoughts on “Review – The Amazing Spider-Man”