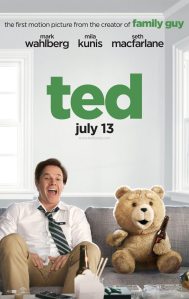 After poking fun at Hollywood via the cartoon series ‘Family Guy’ and ‘American Dad’, it’s time for writer/director Seth MacFarlane to step up with his film debut ‘Ted’. MacFarlane’s brand of humour shines in parts but the overall story of arrested development and romance almost becomes worthy of parodying on one of MacFarlane’s own cartoon creations.

John Bennett (Mark Wahlberg) is best friends with a talking teddy bear named Ted (voice by MacFarlane) who he wished to life when he was a child. Now in his late 30s, John’s relationship with Ted is tested when his girlfriend Lori (Mila Kunis) wants more from their relationship.

‘Ted’ has a few hilarious moments but despite MacFarlane’s razor sharp wit, and along with fellow screenwriters Alec Sulkin and Wellesley Wild, they all too often try to milk laughter from pointless profanity or a gag intended to shock. It seems that MacFarlane is smart enough to bend his comic sensibilities to appeal to the masses and that weakens the comedy a little. There is still no doubt that MacFarlane is one of the best comedic minds working in entertainment and he proves it with a few genius fart gags that somehow manage to avoid being too crude and convincing Patrick Stewart to provide a comical voiceover – it’s a strange mix.

There are plenty of nice pop culture references and cameos that will raise a wry smile, especially if you grew up in the 1980s. A majority of the film is a huge homage to Flash Gordon (1980) that will probably leave younger audiences stumped but rentals are sure to multiply as a result.

Jokes and pop culture references aside, Ted doesn’t offer much with its plot and after a strong start establishing how the talking toy came into existence and became the norm, things become unstable. There is no romance between Wahlberg and Kunis and because it is expected to push the story forward there is nothing to care about. Subplots with rival lovers and people who threaten to endanger Ted are thrown into the mixture but it never comes together cohesively, and for a film that’s not meant to be taken too seriously there is almost a backflip on that mantra in the finale where it gets too sentimental.

‘Ted’ does well for a film built on a thin plot and an outlandish premise but it works well and it’s good to see MacFarlane take his first steps into filmmaking.