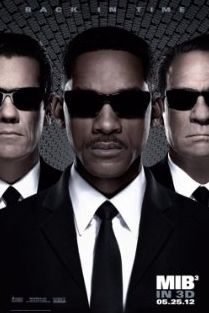 When the first ‘Men in Black’ film was released in 1997 the tagline was “protecting the Earth from the scum of the universe”, a cool little idea that combined sci-fi with comedy and the charisma of Will Smith successfully. 15 years later, 10 years after a bad sequel, ‘Men in Black 3’ arrives with the tagline “back in time” and the promise of 3D. Unfortunately, it’s a case of bad timing and instead of making a triumphant return ‘Men in Black 3’ comes across as a relic from the 90s with a shabby touch up paint job.

Agent J (Smith) must investigate an intergalactic criminal who has tampered with the timeline of the universe that puts the life of Agent K (Tommy Lee Jones) and the Earth in danger. Agent J travels back in time to 1969 to solve the mystery.

The world of ‘Men in Black’ has always been full of all crazy creatures and special makeup effects artist Rick Baker fills ‘Men in Black 3’ with his wild creations that look fantastic.

Lacklustre performances suck a lot of energy out of the film and when you pay to see a movie with Smith you’re basically paying for his hyperactive wise cracking personality. In ‘Men in Black 3’ he seems deflated and lacking the charm that made him famous. So much of the film is reliant on Smith’s appeal and because it’s missing in action a lot of the film’s humour falls flat.

Jones has had top billing in previous the films but he practically makes a cameo this time round. Taking over for most of the time is Josh Brolin playing a younger version Jones. Brolin does a spot on impersonation but it adds nothing to the character and is like watching an extended ‘Saturday Night Live’ sketch.

None of the action is engaging nor does it push the story forward, it’s just an excuse to play around with shiny gadgets and vehicles.

The time travelling plot is intriguing and there is fun poking around in the 60s, especially with the true identities of a few historical figures, especially an extended gag about Andy Warhol.

The biggest letdown in ‘Men in Black 3’ is an attempted emotional hijacking that occurs close to the finale. It’s as if the writers were hoping that if they could con you into feeling something towards the end, it would be easier to forgive the lame two-thirds of the film you endured. It’s like drinking non-alcoholic beer at a party and then someone spikes your drink to make the night more memorable. It’s a terrible shame that shows the filmmakers have no faith in the higher brain functions of the audience.

One thought on “Review – Men in Black 3”