‘Captain America 2’ has a release date of 4 April 2014. It was made official today by Disney and Marvel Studios. The date had already been flagged by the studio but without a film attached.

Disney and Marvel Studios also provided brief details on the films plot and how it relates to ‘The Avengers’.

Hit the jump to check out the details. 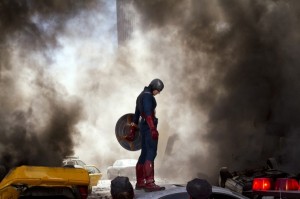 “The second installment will pick-up where the highly anticipated Marvel’s ‘The Avengers’ leaves off, as Steve Rogers continues his affiliation with Nick Fury and S.H.I.E.L.D and struggles to embrace his role in the modern world.”

Disney and Marvel Studios are currently on the hunt for a director with Collider reporting that F. Gary Gray (‘The Italian Job’), George Nolfi (‘The Adjustment Bureau’), and television directors Anthony and Joseph Russo (‘Community’).

The current lineup of Marvel Studios releases are:

And how could we forget, ‘The Avengers’ is released:

One thought on “‘Captain America 2’ gets release date + plot details”