Trailer and poster for ‘Safety Not Guaranteed’

The inspiration for a film can come from anywhere. Theme park rides, board games and now add newspaper want ads to the list with the upcoming release of ‘Safety Not Guaranteed’.

The film stars Aubrey Plaza as a magazine intern who goes undercover to investigate a man (Mark Duplass) who placed an ad looking for a time-traveling partner.

The film is loosely based on the real want ad (see below) that was placed in a newspaper in 2005. 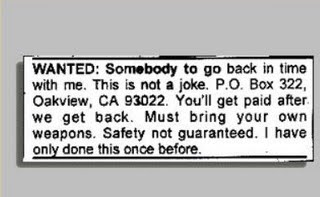 Filmdistrict has released the first trailer and a poster for the film.

The trailer looks great and the film has already received a lot of praise after playing at several film festivals.

Hit the jump the check out the trailer and the poster. 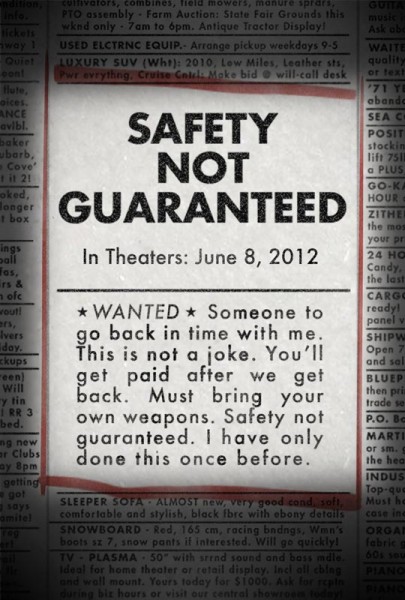 “From the producers of Little Miss Sunshine – When an unusual classified ad inspires three cynical Seattle magazine employees to look for the story behind it, they discover a mysterious eccentric named Kenneth, a likable but paranoid supermarket clerk, who believes hes solved the riddle of time travel and intends to depart again soon. Together, they embark on a hilarious, smart, and unexpectedly heartfelt journey that reveals how far believing can take you.”

‘Safety Not Guaranteed’ is released:

One thought on “Trailer and poster for ‘Safety Not Guaranteed’”