In our books, Tim Burton is running out of chances. His unique visual style is becoming stale and he is far from the” visionary director” label he gets tagged with.

‘Alice in Wonderland’ was a dud despite making tons of money at the box office. We’re giving Burton the benefit of the doubt with his next film ‘Dark Shadows’. The film is based off the 1960s-70s cult TV series, and centers on vampire Barnabas Collins’ (Johnny Depp) attempt to reintegrate with his descendants after having been buried for 200 years.

There is still no trailer for the film yet but considering we’re almost two months away from the film’s release, one should drop soon, especially since more images are being released everyday.

Hit the jump to check out the images. 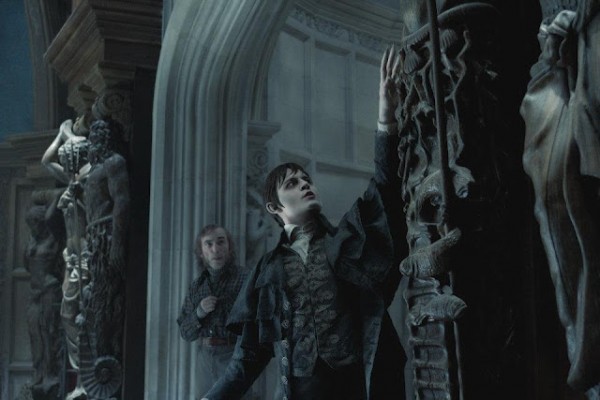 “In the year 1752, Joshua and Naomi Collins, with young son Barnabas, set sail from Liverpool, England to start a new life in America. But even an ocean was not enough to escape the mysterious curse that has plagued their family. Two decades pass and Barnabas (Johnny Depp) has the world at his feet—or at least the town of Collinsport, Maine. The master of Collinwood Manor, Barnabas is rich, powerful and an inveterate playboy…until he makes the grave mistake of breaking the heart of Angelique Bouchard (Eva Green). A witch, in every sense of the word, Angelique dooms him to a fate worse than death: turning him into a vampire, and then burying him alive.
Two centuries later, Barnabas is inadvertently freed from his tomb and emerges into the very changed world of 1972. He returns to Collinwood Manor to find that his once-grand estate has fallen into ruin. The dysfunctional remnants of the Collins family have fared little better, each harboring their own dark secrets. Matriarch Elizabeth Collins Stoddard (Michelle Pfeiffer) has called upon live-in psychiatrist, Dr. Julia Hoffman (Helena Bonham Carter), to help with her family troubles.

← Behinds the scenes of ‘Pirates! Band of Misfits’
Giveaway – The Cup →