Review – We Need to Talk About Kevin 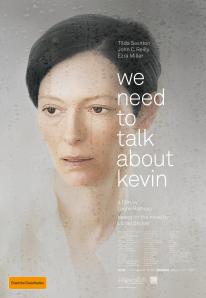 Thanks Bible, I can now tick you off my list of writing clichés. Every family has a black sheep. It doesn’t matter if you’re privileged or poor, they always emerge. When the black sheep turns into a raging bull and creates problems, it’s easy to blame the parents. ‘We Need to Talk About Kevin’ is a dark satire of parenting that brings to life every parent’s worst nightmare.

Eva (Tilda Swinton) is putting her life back together after an incident involving her son Kevin (Ezra Miller) rips her world apart and destroys the lives of other families living in the town. While still living in the community, she reflects on her motherhood and the events leading up to the dreadful event.

‘We Need to Talk About Kevin’ has a blaring subtext that blasts from every scene and becomes repetitive very quickly. It’s relatively obvious early on how the story will end, but director Lynne Ramsay manages to draw you in and the questions start to pile up. Your brain will start buzzing and it becomes obvious that ‘We Need to Talk About Kevin’ isn’t a one-sided story.

Swinton gives an amazing performance and is one of the reasons the film works so well. She plays her character with great vulnerability, yet she could also be considered accountable for her son’s actions. It’s the great question that hangs over the film – is the parent to blame or the child? Miller is very good as the teenage Kevin and puts the icing on the cake after several different child actors put on their best creepy faces. John C. Reilly is excellent as the ultimate pushover dad.

‘We Need to Talk About Kevin’ packs in a lot of social commentary, including the way the media turns criminals into celebrities, post-natal depression and the number of reluctant parents in our midst.

Despite the dark themes that run throughout the film, it’s a redemptive story that will challenge your views on what it means to forgive someone. My mind is still wrestling with the moral questions that pop up in ‘We Need to Talk About Kevin’, and I’ve questioned my existence a few time already this week. If none of this sounds to your liking, the film also serves as one of the best contraceptives ever. It’s a punch to the gut of your parental instincts. Wannabe parents be afraid, be very afraid.

‘We Need to Talk About Kevin’ is now showing in Australian cinemas.

7 thoughts on “Review – We Need to Talk About Kevin”