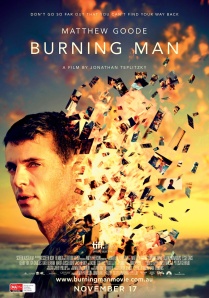 Australian films have really stepped into the limelight in 2011. ‘Red Dog’ raked in the cash, ‘Snowtown’ horrified and ‘The Hunter’ introduced the world to a place called Tasmania. The industry has started to diversify and attract talent from all around the globe to help tell uniquely Australian stories. ‘Burning Man’ is a perfect example of the new frontier of Australian filmmaking at work and the high standard that can be achieved.

Tom (Matthew Goode) is a highly strung British chef living in Sydney and on the verge of a breakdown. A strained relationship with his young son and several female companions complicate Tom’s life, as he struggles to deal with a great emotional pain from his past.

It’s hard to talk about ‘Burning Man’ without giving away the major twist that makes the film great. On paper ‘Burning Man’ could have been a sentimental mess, but writer/director Jonathan Teplitzsky chose not to spoon feed his audience. Using a nonlinear style of storytelling, the plot slowly reveals itself and the characters are allowed to properly develop. ‘Burning Man’ creaks like a dam ready to burst and once the banks break, there’s a great outpouring of emotion. Teplitzsky is a very talented filmmaker and I wouldn’t be surprised if he delivers Australia Oscar gold one day.

Providing beautiful cinematography is Garry Phillips, who has collaborated with Teplitzsky on his past projects and hopefully this partnership continues into the future.

Goode is perfect as the anti-hero, who irritates as easily as he charms. Bojana Novakovic is brilliant as his wife and Rachel Griffiths, Essie Davis, Kerry Fox, Anthony Hayes, Kate Beahan and young Jack Heanly are all impressive in minor roles.

‘Burning Man’ is a long film and fatigue does set in a little toward the end, but there’s enough to keep you engaged until the credits roll.

The release of ‘Burning Man’ caps off an incredible year for Australian films and it’s the best way to kiss 2011 goodbye. Hopefully the trend continues; if not, it’s back to what Australian filmmakers to best … drug addiction!